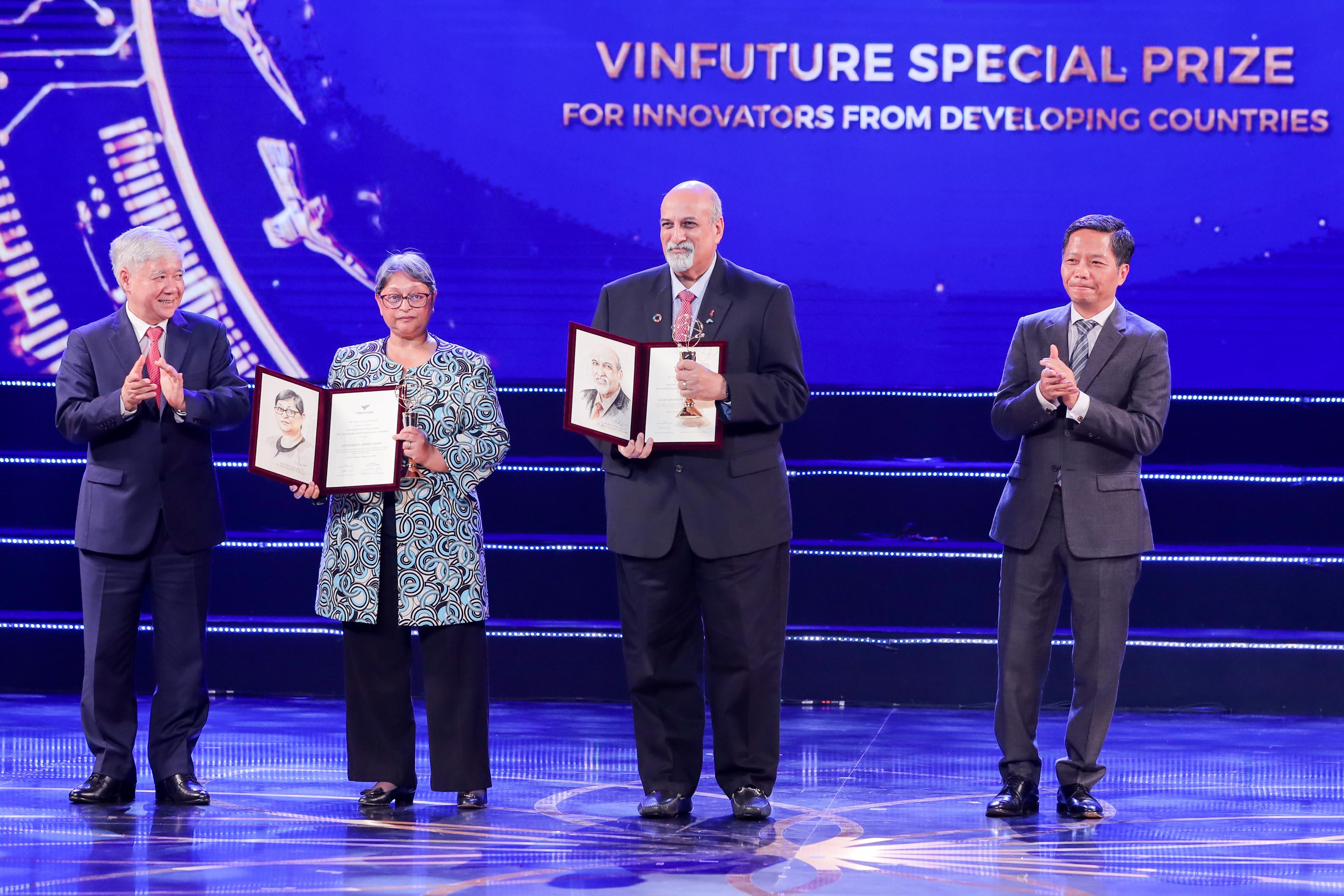 World renowned South African scientists and infectious disease epidemiologists at CAPRISA, Professors Salim and Quarraisha Abdool Karim have been honoured in Vietnam as one of the inaugural recipients of a VinFuture special prize for their ground-breaking research on HIV prevention in South Africa.

The Abdool Karims were awarded the VinFuture Special Prize for Innovators from Developing Countries at a spectacular ceremony held on Thursday 20th January at the Hanoi Opera House, in Hanoi, Vietnam. Eminent guests included Mr. Pham Minh Chinh, Prime Minister of Vietnam, several leaders of Vietnam’s government ministries, ambassadors, Nobel laureates and the Founders of the VinFuture prize and the event included a special guest performance by John Legend

The ceremony honoured the winners of the inaugural VinFuture Prizes, including the $3million VinFuture Grand Prize and three $500,000 Special Prizes - for female innovators, innovators from the developing countries, and innovators with outstanding achievements in emerging fields. The VinFuture Grand Prize was awarded to Dr Katalin Kariko; Professor Drew Weissmen and Professor Pieter R Cullis - the scientists behind mRNA technology for Covid-19 vaccines. The Special Prize, for Female Innovators, was awarded to Professor Zhenan Bao (USA) for her work on developing flexible electronics with the sensing properties of human skin; and the Special Prize for Innovators with Outstanding Achievements in Emerging Fields, was awarded to Professor Omar Yaghi (USA) for his work on discovering metal-organic frameworks.

The Abdool Karims who have ‘tirelessly championed the importance of science in defining the HIV and Covid-19 response,” said Ms Bongiwe Ntuli, Chair of the CAPRISA Board, “South Africa is blessed to have such world-class scientists whose research is making the world a better place.”

“This specific 2022 prize for scientists in developing countries is a beacon of recognition for the many scientists in the developing world who toil away each day in their laboratories, clinics, and libraries - that scientific excellence is achievable in the midst of adversity, “said the Abdool Karims. “While we serve as its recipients, this prize is recognition for the dedication and commitment to excellence by a team of over 200 researchers in South Africa, with collaborators from 5 continents across the globe, and thousands of volunteers who have participated in our studies over the last 33 years.”

Almost 600 nominations across 60 countries were received for the Prize. Of these nominations, nearly 100 came from the world’s top 2% most-cited scientists, many of whom are themselves laureates of distinguished awards, such as the Nobel Prize, Japan Prize and Tang Prize.

Professor Sir Richard Friend, VinFuture Prize Council Chair, said “The VinFuture Prize recognizes truly outstanding scientific work that has made and will make, a positive impact on the lives of millions, or even billions, of people around the world. The winners have brought new solutions for some of the most significant challenges that humanity is facing, such as infectious diseases and meeting the urgent need for zero carbon energy. The VinFuture Prize celebrates the power of science and technology to solve global problems.”

The VinFuture Foundation is an independent, not-for-profit foundation in Vietnam. The Foundation was established with a vision of creating meaningful change in the everyday lives of millions of people by honouring transformational technological innovations.

The award programme is part of the VinFuture Foundation, an independent, not-for-profit set up by Mr. Phạm Nhật Vượng, the first Vietnamese billionaire and Founder and Chairman of the largest Vietnamese conglomerate, VinGroup Corporate, together with his wife, Mrs. Phạm Thu Hương, to create meaningful change in the everyday lives of millions by recognising and rewarding transformative innovation in sci-tech.

The Foundation’s mission is to build a future where breakthrough scientific research and technological innovations empower people, positively enhance their lives, and create a more equitable and sustainable world for future generations; and to leverage the power of science and technology to serve marginalized communities and provide equal opportunities to individuals, regardless of gender, social status or nationality.

Centre for the AIDS Programme of Research in South Africa (CAPRISA) is an award-winning global research organisation with its headquarters on the campus of the Nelson Mandela School of Medicine in Durban, South Africa. It undertakes research in HIV, TB and Covid-19 at four clinical research sites in KwaZulu-Natal. CAPRISA’s goal is to undertake globally relevant and locally responsive research that contributes to understanding HIV and SARS-CoV-2 epidemiology and pathogenesis to develop new approaches to prevention, vaccines and treatment. CAPRISA is a UNAIDS Collaborating Centre for HIV Research and Policy and is recognised as a DSI-NRF Centre of Excellence in HIV Prevention and hosts the SAMRC HIV-TB Pathogenesis and Treatment Research Unit.

Salim Abdool Karim, FRS is a South African clinical infectious diseases epidemiologist widely recognized for scientific contributions and leadership in AIDS and Covid-19. He is Director of the Centre for the AIDS Programme of Research in South Africa (CAPRISA), Durban, and CAPRISA Professor of Global Health at Columbia University, New York. He is adjunct Professor of Immunology and Infectious Diseases at Harvard University, adjunct Professor of Medicine at Cornell University and Pro Vice-Chancellor (Research) at the University of KwaZulu-Natal. He previously served as President of the South African Medical Research Council. He is a member of the WHO Science Council and Vice-President of the International Science Council.  He is a member of the African Task Force for Coronavirus and a Commissioner on the Lancet Commission on Covid-19. He was the Chair of the South African Ministerial Advisory Committee on COVID-19.

Quarraisha Abdool Karim, an infectious diseases epidemiologist is co-founder and Associate Scientific Director of CAPRISA, Professor in Clinical Epidemiology at Columbia University and Pro-Vice Chancellor at the University of KwaZulu-Natal.  She is the UNAIDS Special Ambassador for Adolescents and HIV. She is a member of the Steering Groups for the WHO Covid-19 Solidarity Therapeutics Trials and Vaccines Trials. She co-chairs the United Nations Sustainable Development Goal 10 Member Technology Facilitation Mechanism (TFM) and is a member of the PEPFAR Scientific Advisory Board. She is a member of the US National Academy of Medicine and is NRF A-rated scientist. Her research over the past 33 years has focused on understanding HIV transmission and preventing HIV infection in adolescent girls and young women.