Calabash Awards: A night of celebrating contributions to humanity

The awards, of which Unisa’s Chancellor and former President of South Africa, Dr Thabo Mbeki, is the custodian, has a long-standing tradition of acknowledging outstanding South Africans and Unisa alumni who have made or are contributing meaningfully towards the reconstruction and development of South Africa.

Awardees with outstanding track records in their fields of expertise were recognised for their outstanding efforts to improve the human condition. “Unisa is truly proud of these individuals and their achievements,” said the Chancellor.

Captains of industry and stakeholders from different organisations continued to show their commitment to Unisa by attending the event despite the soaring Covid-19 numbers in the country. According to the Chancellor, such support is of defining importance in the quality of the lives of young students who will grow into the adults of tomorrow. “Your support helps Unisa to discharge its responsibilities and assists in generating funds to provide for the future of our first-generation university entrants who are in need of financial support,” he said

The Chancellor said that society owes it to itself and future generations to give an opportunity to the young to contribute positively to society, in line with Unisa’s vision of being the African university shaping futures in the service of humanity.

Unisa’s Claiming Africa’s Intellectual Futures theme continues to be reaffirmed.  The university’s Principal and Vice-Chancellor (VC), Professor Puleng LenkaBula, gave a picture of how intellectual futures can be claimed in Africa through Unisa.

The VC said that the calabash awards are a way of engaging with alumni, members of the public and those who can contribute to stewarding and ensuring that the value of education continues to manifest.

“We are not only a university but a social institution that is supposed to cultivate the spirit of service and citizenry, where we all come in the spirit of Ubuntu to ensure that the idea of education is not a mere dream but fulfils aspirations,” said the VC. “The university is at the centre of ensuring that education becomes imperative.”

“Unisa’s academic programme for the next five years and beyond,” said the VC, “will have 10 catalytic niche areas that have been created. These will turn the university into a centre of excellence that will make the necessary global impact for Unisa’s students.” She invited partnerships and contributions to ensure that Unisa is not only an asset but one of those universities that take their social mandate seriously.

Guest speaker Professor Bonang Mohale, Chancellor of the University of the Free State, reminded the guests of the importance of where we come from as a nation and society. He said that the awards come at a time when we are witnessing the destruction of what we have been gifted as a nation. Amongst the many issues he highlighted was the National Development Plan which stated that the country had 30 years to implement plans drawn up. “We are left with eight years and yet there is no sign that we will reach the commitments made,” he said. “South Africa has the best plans but finds itself languishing at low levels in world rankings. Africa is made poor by the choices we make. Africa is not a poor continent, it’s just not well managed.”

A common thread linking two of the awardees is their affinity to Unisa, especially in terms of how the institution had systematically shaped their futures. Professor Salim Abdool Karim and Deshnee Achary took attendees down memory lane and recounted how Unisa had provided flexibility to pursue work and studies at the same time. They spoke also of affordability and excellence in their studies. Both are leading the field in Covid-19 research to find scientific solutions to the pandemic.

A proud Unisa-trained statistician, Karim received the Public Servant Award. He is an infectious diseases epidemiologist and continues to work in the areas of HIV prevention and treatment. He is well known for his previous role as Co-Chair of the South African Ministerial Advisory Committee on Covid-19.

Achary, a medical scientist for Pfizer Vaccines and a vaccine advocate of 17 years’ standing, received the Outstanding Alumna Award. She dedicated the award to empowerment through education and thanked Unisa for giving her the opportunity to empower herself.

Denise Rosemary Nicholson received the Outstanding Educator Award for making strides in the library and intellectual property worlds. She has advocated for more balanced copyright laws in South Africa and other developing countries. Humbled and honoured to receive the award she says that her passion has been the improvement of access to knowledge to all, which is advanced through an e-newsletter she established in 2021.

Premier of the North West Province, Kaobitsa Bushy Maape, received the Unisa Robben Island Award. He says he was inspired to be part of the event and sees the award as the recognition of the potential some have to make a difference. “The award reinforces my resolve to make my little contribution to ensure that we create a better life for all of us,” he concluded. 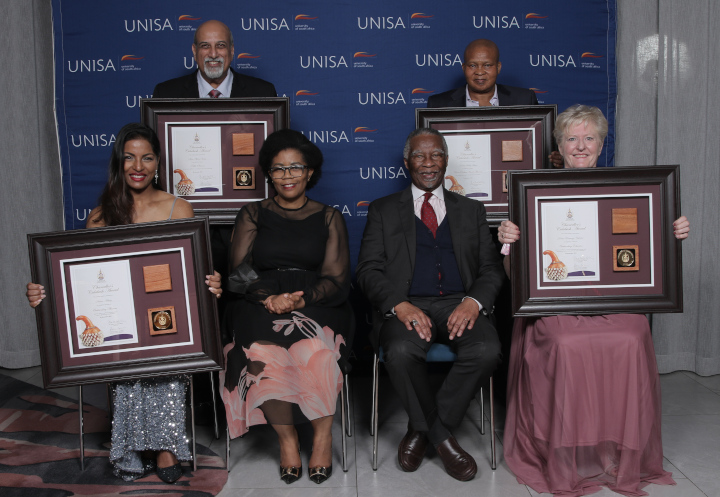