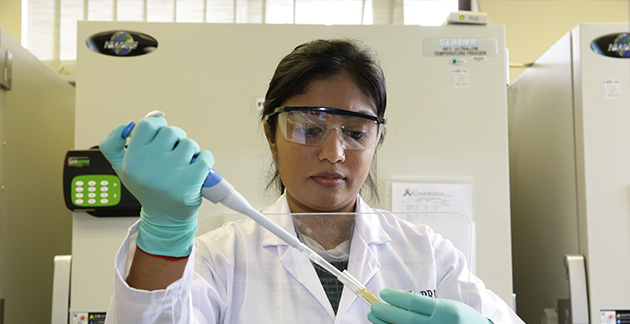 Vaccines are considered the most effective way of controlling viral epidemics. CAPRISA is responding to this challenge through support of HIV Vaccine Trials Network studies, and laboratory research to inform vaccine design. The pivotal study in this research programme is the CAPRISA 002 Acute Infection study which aims to characterize the viral set point and clinical progression in subtype C infection and identify host genetic, immune and viral factors that predict disease progression.

Two of the key challenges in vaccine development are a lack of clarity on what immune responses are needed and which components of the virus need to be targeted to protect against HIV infection. In an attempt to address these challenges, CAPRISA has been focusing since inception, on the earliest transmitted viruses and immune responses in acute HIV infection and on characterising viral and host factors associated with the development of neutralization breadth in later infection.

In CAPRISA 002, 57% of women presented with symptoms during acute subtype C HIV-1 infection and lost half their pre-infection CD4+ T cells during the first few weeks. The severity of signs and symptoms correlated with the enrolment viral load but not with subsequent disease progression. A high proportion of participants experienced rapid disease progression, with 50% reaching the CD4+ T cell treatment threshold of 350 cells/mm3 within two years of infection.

The majority of women (~80%) were infected with a single virus. Studies of viral genomes showed that the complex viral escape patterns occurring within weeks of infection were predominantly associated with cytotoxic T cell responses. Some of these escape mutations were HIV subtype C specific and were associated with a temporary loss of immune control.  Moreover, certain HLA genotypes were associated with mutations in the transmitted virus and appeared to provide the virus with a survival benefit.

About 20% of participants in the study developed broadly cross-neutralizing antibodies by three years post infection. Early strain specific neutralizing antibody responses were found to predominantly target the viral envelope regions C3-V4 and V1/V2. A highlight of the program was the discovery that broadly cross-neutralizing epitopes evolved through escape from these earlier strain-specific antibodies. The team are working on preparing possible clinical interventions using these strong antibodies.