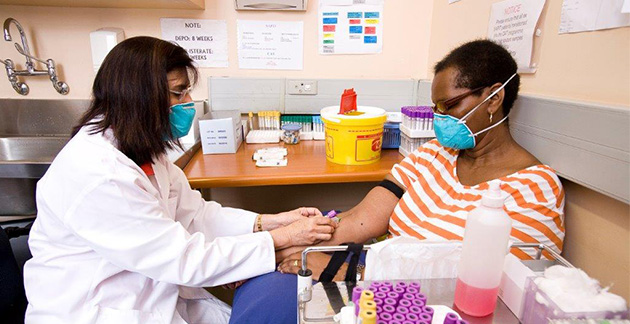 is headed by Kogie Naidoo in association with Nesri Padayatchi.

The eThekwini Clinical Research Site (ECRS) is adjacent to a large government clinic, the Prince Cyril Zulu Communicable Disease Centre (PCZCDC), which since 1955 and has been dedicated to TB and HIV treatment for the local community.  The clinic is conveniently located in Durban's central business district, close to the transport hub that serves commuters from local townships and outlying areas. The ECRS comprises two sections, a Treatment Clinic for HIV-TB co-infected patients and a Prevention Clinic for clients at high risk population of sexually transmitted infections (STIs).  The clinic provides free diagnosis and treatment of tuberculosis (TB) and STIs.

The CAPRISA 001 NIH funded START study demonstrated the pharmacokinetic interactions of Rifampicin - the backbone of TB therapy, and Efavirenz, the non-nucleoside reverse transcriptase inhibitor backbone widely used in combination ART.  These data have been key in addressing a major clinical consideration in treating patients with concomitant TB therapy and ART.

The CAPRISA 003 SAPiT (Starting Antiretroviral Therapy at 3 Points in TB) study demonstrated the optimal timing for initiating ARV in HIV/TB co-infected patients, which was adopted by the World Health Organisation (WHO), the US Department of Health and Human Services and South African Government in their treatment policies.  This study was a randomised, open-label pilot study comparing three existing treatment strategies of ART initiation in HIV/TB co-infected patients.

The PHE TRUTH (TB Recurrence upon Treatment with HAART) study - jointly-funded by the US Centers for Disease Control and Prevention and the Howard Hughes Medical Institute - aimed to determine the extent of and reasons for relapse and re-infection in incident cases of TB in HIV-infected patients on Highly Active Antiretroviral Therapy (HAART).  This was a prospective cohort study of TB-HIV co-infected patients previously treated for pulmonary TB and initiated on HAART in the SAPiT and START trials.  Each incident case of TB recurrence in this cohort of adult patients on HAART was investigated to assess whether the infecting mycobacterium is similar to that from the previous infection and whether the immune responses differ in cases of relapse and re-infection.

CAPRISA has an extramural unit of the South African Medical Research Council which aims to undertake research to reduce morbidity and mortality from HIV-TB co-infection.  The overarching research theme of this unit is the interaction between HIV and TB, focusing on treatment and pathogenesis.

CAPRISA’s involvement in health system strengthening research includes the development, implementation and evaluation of a nurse-driven quality improvement intervention in integrating TB and HIV in primary care clinics aimed at improving HIV and TB outcomes in co-infected patients (The CAP013 study).  This cluster randomised control clinical trial will be conducted in collaboration with BroadReach Healthcare Africa at 30-40 primary healthcare facilities in the Ugu and Uthungulu districts of KwaZulu Natal, South Africa.

The CAPRISA Advanced Clinical Care (ACC) Program addresses capacity building and health systems strengthening in the management of patients with advanced HIV and TB, including ART and TB drug resistance management.
In South Africa non-adherence to the standard WHO TB retreatment regimen is 12 per cent, which probably contributes to the increasing burden of Multi-Drug Resistant (MDR) TB.  There is an urgent need for an evidence-based retreatment regimen to improve treatment outcomes of recurrent TB, a regimen that can reduce morbidity and mortality in a shorter time period.  The IMPRESS (Improving Retreatment Success) study is currently recruiting patients and is an open label randomised controlled clinical trial comparing two regimens for treatment of smear-positive pulmonary TB among patients previously treated for TB.

Among HIV uninfected patients in developed countries, XDR TB is difficult to treat and has worse treatment outcomes than MDR TB. Preliminary data from a prospective trial of drug-susceptible TB and HIV in KwaZulu-Natal has shown improved outcomes with early anti-retroviral therapy, although it it is not known if this will hold true for drug-resistant TB. The Prospective XDR TB (PROX) study will represent the first prospective treatment outcomes data among XDR TB patients in Africa, the majority of whom are HIV/TB co-infected.

CAPRISA AIDS Treatment (CAT) Programme
The PEPfAR-funded CAT Programme provided a comprehensive HIV/AIDS care package to people living with HIV/AIDS at CAPRISA's clinical research sites between 2004 and 2013.  The programme had been successful in reaching large numbers of patients attending the PCZCDC who have benefited from integrated HIV counselling, testing and treatment services into the existing TB and STI services.  The CAT Programme at the VCRS was a nurse-initiated management of ARTs (NiMART) with doctors available for the initial eligibility assessment, as well as for advice and referral.  The PEPfAR related activities carried out by CAPRISA included HIV counselling and testing; HIV wellness management; ART services; TB/HIV services; PHE-funded TRuTH study; medical male circumcision; health system strengthening; and gender challenges in HIV prevention.

AIDS Clinical Trials Group (ACTG) studies
Several NIH funded ACTG studies were also implemented at the CAPRISA ECRS.  These studies were largely directed at improving diagnosis, treatment and outcomes in TB HIV co-infected patients and included the A5274, A5221, A5255, and A5253 studies.