The study entitled, ‘Prospective study of oral pre-exposure prophylaxis initiation and adherence among young women in KwaZulu-Natal, South Africa,’ published in the Journal of the International AIDS Society, highlighted the urgent need for less user-dependent HIV prevention options for young women in Africa, who are unable or unwilling to take daily oral PrEP.

Although, median pill count adherence was 90%, TFV-DP was only detected in 13% of samples tested. In total, 11 women seroconverted yielding an HIV incidence rate of 2.81 per 100 person-years. Nine of 11 seroconverters had initiated oral PrEP, however all showed drug levels equivalent to taking one to zero tablets per week.

In conclusion, despite initiation of oral PrEP in the study, pill count adherence was high, but tenofovir drug levels were poor, with more than half of the women who initiated oral PrEP discontinuing use within 12 months. 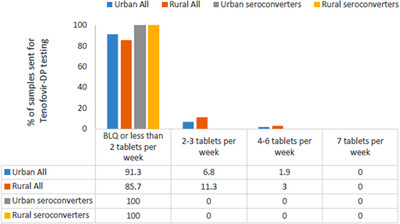 Figure: Adherence to PrEP measured by Tenofovir-DP levels seen amongst young women in the CAPRISA 082 study