During the latest graduation ceremonies, a special parallel event was held in which Ms Gabriella Solomons was awarded a bursary contribution from infectious diseases epidemiologists Professors Quarraisha and Salim Abdool Karim for graduating as the top microbiology student in 2021.

This prize amounted to the Professors' total travel and accommodation costs, which Rhodes University sponsors for each of its honorary doctorates receiving their degree in person in Makhanda. Professors Salim and Quarraisha Abdool Karim were each conferred an honorary Doctor of Science degree from Rhodes University in 2021 and 2022, respectively.

Ms Solomons, in her own words, is "a young girl from a small town called Klerksdorp in the North West Province who has always dreamed beyond her horizons". She graduated with a BSc Honours in Microbiology with Distinction in 2021. Furthermore, she is currently registered as a Master's student in Microbiology within the SA-UK Antimicrobial Drug Discovery Hub. Her research focuses on elucidating the biosynthetic pathway of pyrroloiminoquinone alkaloids in marine sponges endemic to the South African coastline. These compounds have potential as anticancer, antibacterial and antiviral drugs.

After attending her first National Arts Festival in Makhanda at the age of 14, Ms Solomons was intrigued by the prospect of studying at Rhodes University. She stated: "Later, it was my high school Biology teacher Mrs Danielle Botes, a Rhodes University alumna, who shaped and nurtured my interest in Biology and encouraged me to apply for admission into Rhodes University."

On continuing her academic and research career as a Master's candidate, Ms Solomons said, "Being an MSc candidate in the Marine Natural Products Research group under the supervision of the inspiring Professor Rosemary Dorrington is amazing. With this recognition, I am even more confident that my future holds great things and that the field of Microbiology will be changed by the discoveries I look forward to making."

Finally, on receiving the award, Ms Solomons noted that Professors Quarraisha and Salim Abdool Karim are two scientists she greatly reveres. "When I discovered that they would be attending the Rhodes University graduation ceremony for the Faculty of Science, I was just delighted to know that I would be in the same room as them. So after discovering that they would award me a prize for my hard work in Microbiology, I was completely blown away, yet humbled, that I would get to meet them as well."

Ms Solomons has expressed her immense gratitude to Professors Quarraisha and Salim Abdool Karim for the award and what she views as "the phenomenal work they do and contributions they make to the field of science and society".

Moreover, Ms Solomons, in addition to her academic achievements, is also engaged in other aspects of Rhodes University life. She is a senior member of the Rosa Parks residence, serving as a sub-warden since 2020. Furthermore, she was the Rosa Parks Sportsperson of the year in 2019. She has also been involved in several community projects, including being a Hope Jones Foundation Ambassador, working with children with physical and mentally challenged children.

"Gabriella Solomons epitomises the well-rounded Rhodes University graduate, for whom a university education is about more than just academic achievements," said Professor Dorrington. "Her Abdool Karim award is well deserved, and I am sure she will be a role model to inspire other young women to choose a career in science." 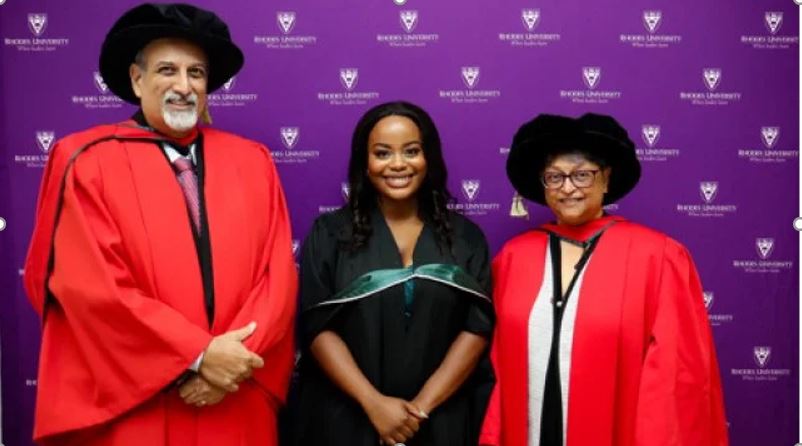