In an article entitled, “Transient association between semen exposure and biomarkers of genital inflammation in South African women at risk of HIV infection”, published in the Journal of the International AIDS Society, researchers investigated the contribution of recent semen exposure on biomarkers of genital inflammation in women at high HIV risk.

Stored vaginal specimens from the CAPRISA 008 trial were screened for prostate-specific antigen (PSA) and Y-chromosome DNA (YcDNA), representing semen exposure within 48 hours (PSA+YcDNA+) and within 3-15 days of genital sampling (PSA-YcDNA+). Soluble protein concentrations were measured in vaginal fluid by multiplexed ELISA assay. T-cell frequencies were assessed in cytobrushes by flow-cytometry, and vulvovaginal swabs were used to detect common vaginal microbes by PCR.

This study demonstrated that recent semen exposure induces transient pro-inflammatory immune responses at the female genital tract (FGT) which may impact HIV risk in women. These findings further emphasize the need for studies of genital mucosal immunity to consider the contribution of semen exposure to the FGT microenvironments, preferably using a biomarker of recent semen exposure. 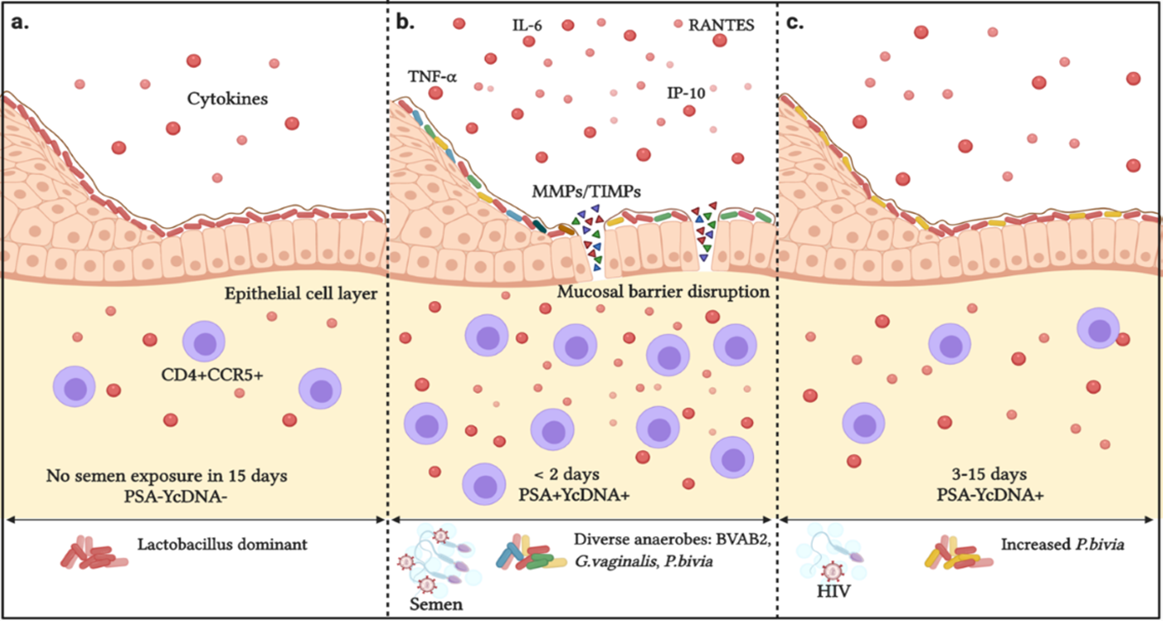 Graphical representation of semen-associated alterations at the female genital mucosa. (a) An optimal vaginal environment in the absence of semen exposure. Here, the vaginal microbiome is dominated by Lactobacillus, few cytokines, and immune cells are present at the FGT, and the vaginal epithelial barrier is intact. (b) In this study, recent semen exposure <2 days before genital sampling and higher YcDNA concentrations were associated with elevated concentrations of several cytokines, MMPs/TIMPs, BV-associated microbes, and HIV target cell recruitment at the female genital mucosa. (c) In comparison, semen exposure within 3-15 days was only associated with moderate alterations in cervicovaginal cytokine concentrations and increased detection of P. bivia compared to no semen exposure within 15 days.