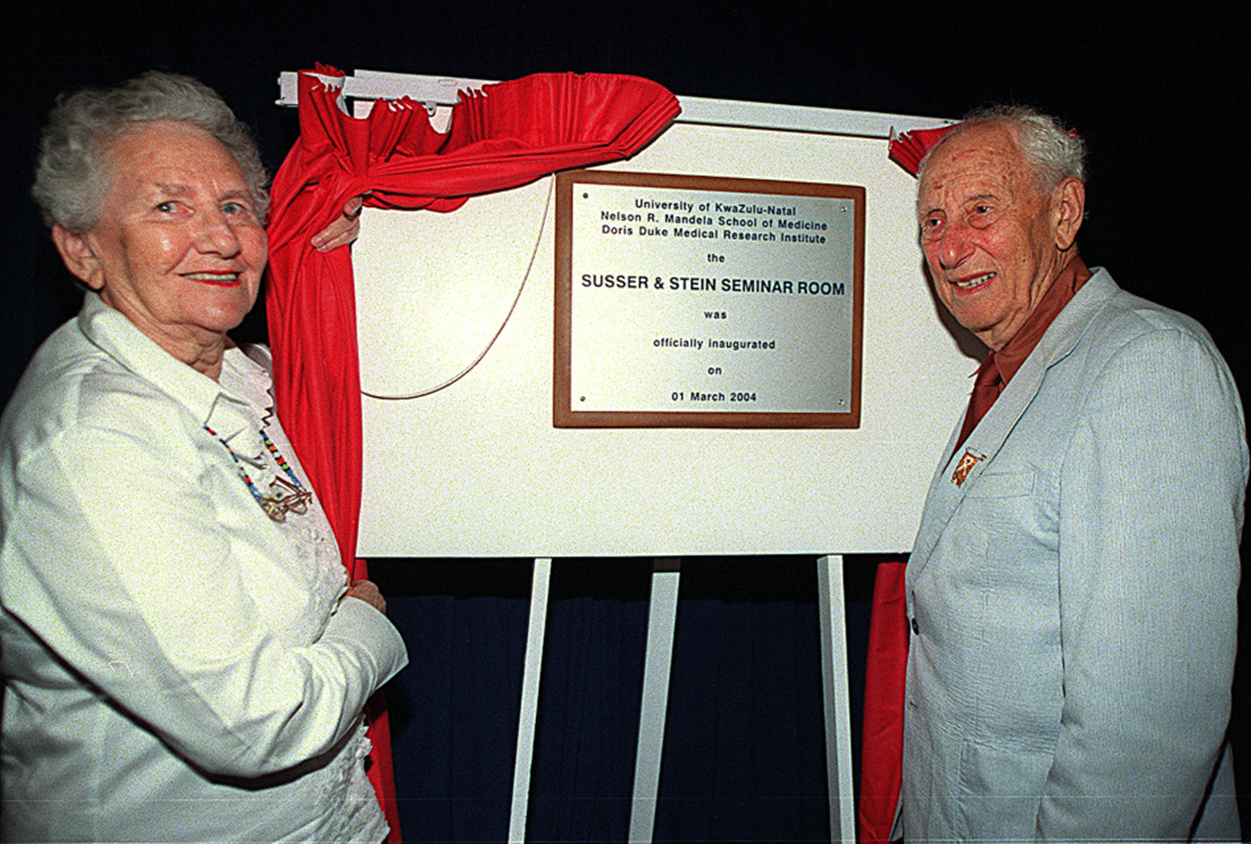 It was the moralistic drive to help others that underpinned all the work Stein did, recognising the need to address inequality as a core means to improve health.

It is with deep sadness that we learned of the passing of Zena Stein – our family friend, a friend of CAPRISA and mentor who passed away peacefully on 7th November this year leaving a formidable legacy of her life dedicated to science and social justice.  Stein was an extraordinary leader in the field of public health and epidemiology, with a deep and unwavering commitment to improve the health of the most vulnerable. Zena Stein together with her husband, Mervyn Susser, formed the Susser-Stein duo that built an impressive legacy of evidence-based advocacy to highlight and address inequalities in society.

Stein was born on 7 July 1922 in Durban, South Africa, completed her primary schooling at Gordon Road Girl’s School, and high school at Durban Girls High in Glenwood. She began her career by studying history at the University of Cape Town, graduating with a Master of Arts degree. It was after serving as a nurse during World War II and seeing the toll of the war that Stein and Mervyn Susser (who she knew from childhood) decided to enter a profession where she could make a difference to society. She began studying medicine in 1945 at the University of Witwatersrand in Johannesburg, motivated by the goal of helping poorer and more disadvantaged populations.

In the citation for her honorary doctorate from Wits, Stein was described as “one of the most notable medical graduates of the University of Witwatersrand.” It was the moralistic drive to help others that underpinned all the work Stein did, recognising the need to address inequality as a core means to improve lives of the most vulnerable whether it was in apartheid South Africa, among coal miners in the United Kingdom or mental health issues; or reconciling grandmothers with lost grandchildren in Latin America or the gap in women-initiated technologies in response to HIV.

In a 2003 interview, about racial disparities in health outcomes in South Africa, Stein recalled: “There was a mismatch between our formal lectures and what we knew was happening in our own country. We knew something was wrong and we would have to go beyond our formal training to address it.”

Stein was a pioneer in the field we have now come to know as epidemiology, which at the time of her studies didn’t exist. Acknowledging the severe gaps in the curriculum offered, Stein and Susser sought to bring in a more human element to health and began joining in study groups outside of school.
She wanted more than what textbooks could offer, wanting to learn more about diseases that were having a direct impact on people right on their doorstep. Stein didn’t want to learn about “public health” in the abstract — but rather how to actively help prevent problems that people were facing at a community level.

This is eloquently captured in the 1955 Susser-Stein article in The Lancet entitled “Medical care in a South African township” (The Lancet 1955; 265: 912–915). Consequently, much of Stein and Susser’s early work in the 1950s in South Africa laid the foundation for robust scientific research on maternal and child health and was central in creating awareness about the impact of environmental factors on reproduction. Her approach to science has been credited as making science more practically useful while maintaining rigour and academic robustness. She never compromised on academic rigour, even when highlighting a social problem, as illustrated by the article published in 1959 in The Lancet on the problem of Ortho-cresyl phosphate poisoning in Cato Manor township in Durban.

Stein and Susser left South Africa for political reasons but continued their fight against the inequalities in health through their research and the creation of CHISA (Committee for Health in South Africa). Stein never lost her love for South Africa — or its treats. The Abdool Karims would always visit her in New York bearing Peppermint Crisp chocolate bars and rooibos tea, much to her delight. We will always remember Stein for her warmth as this gentle, caring, highly energetic, and friendly person who always had time for all with whom she met.

Stein (together with Mervyn Susser) used to go swimming every morning on their annual visits to South Africa that they resumed post-democracy.  Indeed, Zena’s passion for swimming comes from her years of coaching by the famous swimmer Rachel Finlayson and goes back to her days in primary school at Gordon Road Girl’s Primary School.

Stein had great insight in applying for a US NIH grant to establish the Columbia University-Southern African Fogarty AIDS International Research and Training Program in 1994 that laid the foundations for building the science capacity in South Africa to enhance responses to HIV and TB.  In fact, there are few HIV/TB organisations in South Africa that do not have at least one scientist from this programme; often in a leadership role. Stein was an inspiration to all who were fortunate to have met her and privileged to have been mentored by her.  A true visionary, brilliant scientist, exemplary and inspiring role model for women scientists and for global health practitioners.

Post-apartheid, when Stein and Susser were in their 70s they returned to South Africa at the request of the Abdool Karims to serve as co-Directors of the Africa Centre for Health and Population Studies in northern KwaZulu-Natal while the search for a Director was underway.  Indeed, the University of KwaZulu-Natal recognised the phenomenal contributions that they made to primary healthcare and named a lecture hall in the Doris Duke Medical Research Institute at the Nelson R Mandela School of Medicine the ‘Susser-Stein Seminar Room’.

Determined to improve the lives of women and children, the humble start to her medical career began with serving the disadvantaged community in Alexandra, South Africa and ended in the hallowed halls of Columbia University where she was: Professor and Head of the Department of Epidemiology and Professor in Psychiatry at Columbia University and co-director of the HIV Center for Clinical and Behavioural Studies at the New York State Psychiatric Institute.

Stein received numerous accolades for her many contributions to the field of epidemiology.  She received the John Snow Award from the American Public Health Association, and honorary doctorates from Columbia University in the US and the University of Witwatersrand in South Africa and the SAMRC President's Award.

Her unwavering legacy of social justice will always be remembered.  Our thoughts are with her son Ezra Susser, and daughters Ida Susser and Ruth King, her grandchildren, and great-grandchildren.

Hers was a life well-lived and full of meaning right to the very end!