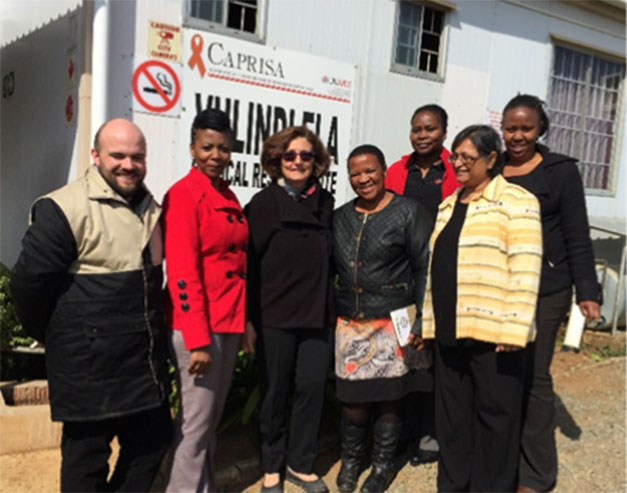 Dr Linda Fried, Dean of the Mailman School of Public Health (MSPH) at Columbia University, visited CAPRISA in Durban from 6 - 12 August 2015, building on MSPH’s long-standing collaboration with CAPRISA and the Nelson R Mandela School of Medicine at the University of KwaZulu-Natal (UKZN).

During her visit, she met with UKZN Vice-Chancellor, Dr Albert van Jaarsveld, Deputy Vice-Chancellor of the College of Health Sciences, Dr Rob Slotow and the Deans of Clinical Sciences, Health Sciences, Nursing and Public Health. During these discussions, Dean Fried explored opportunities for further collaboration and training to advance global health.

MSPH is one of the five partner institutions that created CAPRISA in 2002.  Dean Fried currently serves as a member of the Board of Control of CAPRISA, which is led by Drs Salim and Quarraisha Abdool Karim, who are both professors in the MSPH Department of Epidemiology. The link between CAPRISA and MSPH was originally developed by Drs Zena Stein, Mervyn Susser, Alan Berkman and Allan Rosenfield and built on the Fogarty-funded Columbia University-Southern African AIDS International Training and Research Programme (AITRP). 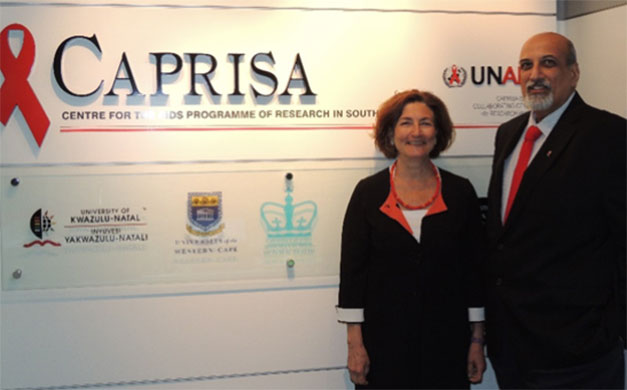 During her visit to the CAPRISA research clinics in Durban and Vulindlela, Dean Fried had an opportunity to meet with several of the Fogarty Fellows. The eThekwini Clinic, which is located in central Durban, adjoins the largest government outpatient tuberculosis (TB) facility in Durban, the Prince Cyril Zulu Communicable Disease Centre. This Centre provides free diagnosis and treatment for patients with TB in Durban. Approximately 8000 TB patients attend the clinic each month.

TB and HIV infection are individually major global public health concerns but the two intertwined epidemics are a devastating and deadly combination, responsible for more deaths than any other condition in South Africa.  South Africa is among the highest burden countries, ranking highest in the world for TB incidence and third highest for the total number of TB cases each year. CAPRISA’s rural research facility, the Vulindlela Clinic is about 90 minutes from Durban. Dean Fried spent a day in Vulindlela, where she visited the clinic and was invited to the home of one of the community members. Dean Fried had the opportunity to see the challenges of rural living and rural health care first hand.

Dean Fried delivered a Faculty Lecture at the medical school highlighting the “Opportunities and challenges in improving global health” and the keynote address at the CAPRISA “Celebration of Excellence” function focusing on the meaning of scientific excellence. She announced the newly created endowed “CAPRISA Chair in Global Health” in the MSPH’s Department of Epidemiology with Dr Salim Abdool Karim being the first appointment to this Chair.  At the function, the South African National Research Foundation announced that Dr Quarraisha Abdool Karim, who is a Professor of Clinical Epidemiology at MSPH, had received its highest ranking, an “A-rating”. Dr Abdool Karim is only the second black woman ever in South Africa to get an A-rating. (see newsclip on: https://www.youtube.com/watch?v=ow2N8QuIaKg )

During her visit, Dr Fried also had the opportunity to meet and interact with the senior scientists at CAPRISA. During these meetings, she explored how relationships between CAPRISA and MSPH could be strengthened. Importantly, she was able to see first-hand the impact of CAPRISA’s research and training activities on the HIV epidemic and global health in South Africa.