Professor Quarraisha Abdool Karim, Associate Scientific Director CAPRISA, delivered the inaugural Nkosi Johnson Memorial lecture at the opening of South African Voices: Towards a Museum of HIV Memory and Learning on Monday 11th July 2016. She said: “Nkosi Johnson would be proud of the South African Voices exhibition as an important and inspiring legacy project that captures a critical point in the history of our response to AIDS through art, photos, artefacts, documents.” 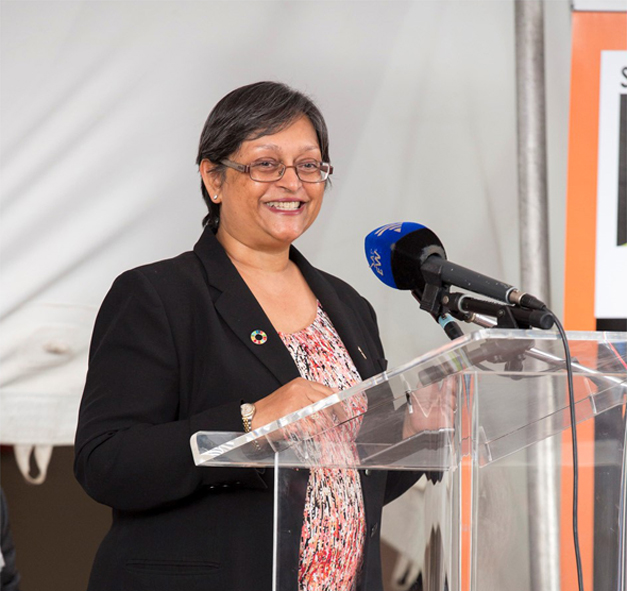 Distinguished guests, ladies and gentlemen. It is a special honour and privilege to be invited to deliver the inaugural Nkosi Johnson Memorial lecture. This is an evening of rememberance, celebration, reflection, participation and learning.

It feel like yesterday but in fact it was 16 years ago when I first heard Nkosi Johnson speak for the first time at the opening of the International AIDS conference in Durban in 2000. President Mbeki had just exited the podium leaving the thousands of delegates in a state of shock with his denialist stance on AIDS. Up comes up this tiny, well dressed little boy and from his first words captivates and inspires every person in the audience and the world. He had all of us in awe with his courage, passion, leadership.  Here was this little boy speaking truth to power in a manner that was beyond his years of existence. He highlighted the plight of HIV infected children positive children and how their rights and dignity were being violated all the way from access to medication to schooling. On that balmy winter’s evening at the Sahara Stadium he gave a voice to the voiceless and a face to AIDS in Africa. While this brave young boy is no longer with us – his life prematurely curtailed by AIDS like his mothers and many hundreds of thousands in South Africa his wisdom, courage and fortitude lives on and continues to inspire us.

I can imagine Nkosi Johnson looking down at us with his huge inimitable smile and celebrating the fact that today HIV is no longer an inevitably fatal condition and that mother to child transmission of HIV has almost been eliminated. He would be ecstatic that South Africa has 3.4 million people on antiretroviral treatment, that life expectancy has increased from 48 years to 62 years and that rates of transmission to infants has declined from 30-40% to <2%. He would be pleased to see access to ARVS that he argued for has given hope to people living with HIV; reduced mother to child transmission and is being used to prevent HIV infection and that today we are discussing the possibility that soon AIDS will no longer be a public health threat – where the number of new infections have been substantially reduced, and where AIDS related illness and death becomes history.

Even while celebrating these successes he would be challenging us whether we have turned the tide on the epidemic? Alas we would have to say that today globally we have 37million people living with HIV and we have only reached about half of them with ARVs; that in 2015 alone 1.2 million people died of AIDS and 2.1 million new infections took place.  We are seeing about 6000 new infections each day; two out of three in sub-Saharan Africa and 1 out of three in young people between the ages of 15-24 years.  That 62% of all people living with HIV are in 10 countries; 8 out of the 10 are in sub-Saharan Africa with South Africa being number one with 18% of the global burden of HIV despite being home to <1% of the global population. That within South Africa about 30% of all pregnant women have HIV and despite increasing numbers of people on treatment this has remained stable for the past 8 years. Five districts have an HIV prevalence >40% and four of these 5 districts are in KwaZulu-Natal and that the remaining 7 districts have a prevalence of 30-40%. He would be saddened by the fact that adolescent girls and young women are bearing the brunt of this epidemic and have up to eight times more infection compared to their male peers and are dying from complications during pregnancy and birth. He would want to know where the fathers are what kind of community we are to watch this continue. He would be challenging us to reach the 50% not on treatment and continue to fight stigma and discrimination and work together to be the generation to end AIDS.

He would be proud of the South African Voices exhibition as an important and inspiring legacy project that captures a critical point in the history of our response to AIDS through art, photos, artefacts, documents. He would be pleased to see us remembering those who made many sacrifices to draw attention to an emerging and growing epidemic and fight for the rights to access to affordable treatment and interventions to reduce mother to child transmission and to see how evidence based advocacy and science has brought us to this critical point.He would be urging us on and gently reminding us that the journey is not yet over and while  institutionalising the voices today will ensure current and future generations can participate reflect and learn he would be urging us on saying: "Do all you can, with what you have, in the time you have, in the place you have....."