The International Day of Women and Girls in Science is celebrated on 11 February. As part of UNAIDS’ Right to Health campaign last year, UNAIDS Special Ambassador for Adolescents and HIV and champion for young women in science, Quarraisha Abdool Karim, spoke with her daughter about her life’s work and the importance of women’s involvement in science and health.

A: For me, growing up I was surrounded by science and it was part of my daily life, but what got you interested in science and health?

Q: Probably for most of my life I thought about science and its application to leaving people better off. So, I wanted to be a scientist and I wanted to do something that would help people.

A: Science continues to be a male-dominated field, like many others, so I feel like you brought an interesting perspective to your research. How do you think your experience as a young woman influenced your research?

Q: My very first study, when I was relatively young, 28, was when I did the first population-based survey in South Africa. The data were very clear, that young women had a four-times higher HIV infection rate than young men and that women acquired HIV about five to seven years earlier than men. And that intrigued me a lot and I spent the next 20-odd years trying to really understand that better. To understand why young women were getting infected but not young men and to understand what some of the factors were that were influencing young women to become sexually active.

A: It’s interesting to me that you chose to focus on understanding why women are becoming sexually active, because I feel like my high school education was very focused on abstinence. Even though we did have a version of sex education, it wasn’t very informative or useful. Do you feel like there’s been a change in education around topics like reproductive health since you were in school?

Q: You know, I grew up in a much more conservative era, where having relationships in high school and being sexually active were much more frowned upon. But I think that teachers still feel very uncomfortable talking about sexual health and choices and generally about reproductive health issues in South Africa, or, I would go so far as to say, in Africa.

A: I agree, I think there's still this hesitance to discuss sex openly at school. While the topic of sex might not have been off limits in our home, it definitely made some of my friends uncomfortable if I brought it up in conversation.

Q: You’re reminding me of something else that I’ve learned in working with young people, which is that they don’t like getting information from adults and people they’re familiar with. They're more comfortable getting information from their peers. It shows how knowledge is important, but also how it’s viewed in the community and how the society you live in influences your ability to act.

A: Well, you’re talking about the role of the community, which extends beyond just education and policies. Nowadays, I think people are becoming more aware of the intersectionality of issues and health is no exception. Young women have been a central part of your research. What are some of the other factors that affect their lives?

A: The reality of gender power dynamics is something I only really began to understand when I was at university, because it wasn’t really an issue for me when I was at my girls high school. Do you think that the political landscape of South Africa changing to a democracy has had an impact on these gender dynamics?

Q: Although the politics has changed, that has not been translated to the grass-roots level. Younger women needed to understand that they are now in a different world in South Africa, with many more opportunities.

A: That comes back to the idea of gender dynamics and community. I feel that there’s this idea of girls lacking independence and that makes it more difficult, especially for young women, to feel like they can make their own decisions when it comes to their bodies.

Q: So, I think there is this tension, and I think you are in a better position to talk about women of your age or younger. There used to be this thing about how women should be ignorant about their bodies and their partners will be able to tell them everything. Whereas I think to be empowered, you actually need to know about your own body. It’s so important for young women to have access to information about health. We need to be encouraging an attitude where young women are no longer ashamed to know about their own bodies. Do you think there’s a way we can address this?

Q: Having a social environment that is supportive of those norms is critically important, because young women themselves have very little agency. But in order to create that climate and context, it will necessitate men taking greater responsibility, boys taking more responsibility for themselves and their behaviours.

A: Education is such a key part of creating that environment and addressing the topic of health. Being able to see the impact that your research had on public perceptions gave me a sense of the power that information can have and was part of the reason why I decided to be a journalist. This is something particularly important in this day and age, when we need to combat the spread of misinformation and debunk myths in health care and beyond. 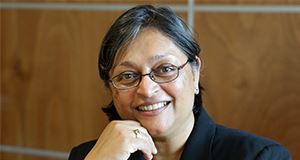