Over 100 of South Africa’s leading researchers attended the Annual Directors’ Forum for the country’s 15 DST-NRF Centres of Excellence held on 25-26 August 2016 and was officially opened by Dr Albert van Jaarsverld, Vice-Chancellor of UKZN.

The Forum was hosted this year by the University of KwaZulu-Natal (UKZN) and CAPRISA and was held at the UNITE building on the UKZN Howard College campus. Dr Phil Mjwara, the Director-General of the Department of Science and Technology (DST) delivered the Keynote Address on 26th August. The forum, which showcases several of the country’s leading scientists, included an exhibition where each Centre of Excellence (CoE) demonstrated the focus of their research, provided interactive displays, talks and the opportunity to meet and discuss science.

Dr Thomas Auf der Heyde Deputy Director- General of the DST took learners on a scientific journey of South Africa’s major research and innovation projects in his presentation on 25th August. The exhibition also provided an opportunity for interested undergraduate and postgraduate students to interact with post-docs and scientists from the CoEs to gain insight into the opportunities for further study and careers in research. 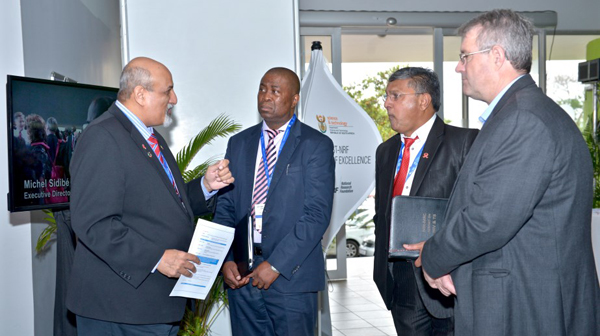