The meeting focused global attention on the importance of a Fast-Track approach to the AIDS response over the next five years. The UNAIDS Fast-Track approach aims to achieve ambitious targets by 2020, including: fewer than 500 000 people newly infected with HIV, fewer than 500 000 people dying from AIDS-related causes and the elimination of HIV-related discrimination.

It is specifically for High Level country delegations to agree on the future global AIDS response. The meeting, held at the UN in New York, agreed on a declaration that will be critically important for defining the fu-ture course of the global AIDS response. To this end, the High Level Meeting’s declaration will galvanise the HIV response and mandate certain UN commitments in the response.

UNAIDS, as the Joint United Nations Programme on HIV/AIDS, is playing a key role in this process. Among the various contributions that UNAIDS made was a focused Symposium (referred to in UN parlance as an official Side Meeting). The purpose of this meeting is to inform delegates on the scientific basis for the UNAIDS goal of the “End of AIDS” as a public health threat by 2030. As I learnt, the Side Meetings are where much of the discussions and debates occur to create a consensus for the politicians to vote on at the High Level Meeting itself.

Quarraisha and I spoke in the UNAIDS Side Meeting – see photos on the right of the Session Room and the panel. It was a fascinating meeting and overall, it went very well. I participated in other panels as well and attended several more – every one of them was good. In one panel, we had a real live African Princess with a royal green dress and tiara!

The highlight for me was the Opening Plenary – what an occasion! One had a sense of history being made! Thankfully, Quarraisha and I had named reserved seats in the VIP section of the packed to capacity General Assembly – with the best seats in the house, we simply absorbed the breath-taking occasion. 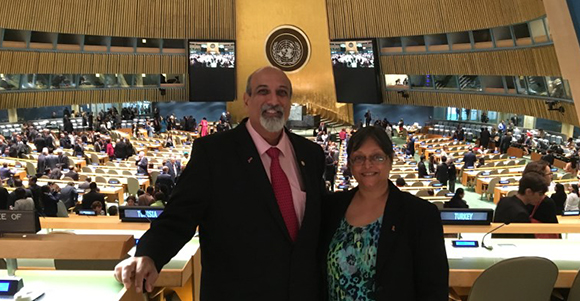 Profs Salim and Quarraisha Abdool Karim at the UN Opening Plenary held at the UN in New York.

Michel Sidibe was brilliant in his address to the plenary – he touched on the key issues powerfully and eloquently. He left no-one unsure of what the world’s marching orders needed to be. The talks by Joyce Mujuru (HIV positive sex worker from Zimbabwe) and Nelson Mandela’s grandson (whose father and mother died of AIDS) followed with moving words.

Once the individual countries started the comments, I felt the push back – Iceland complained about sex work being included in the declaration, others about MSM, etc  But mostly, the comments were positive, with the US delegation making some strong points in support of the declaration.

I came away in no doubt that we have each contributed in our own little way to something truly historic and momentous! 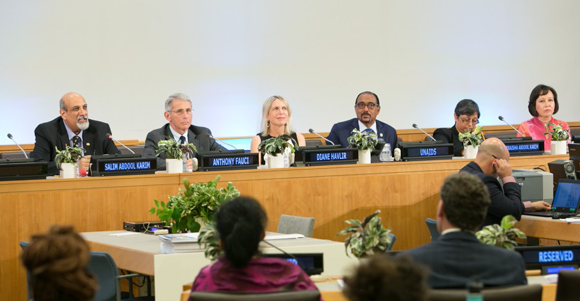