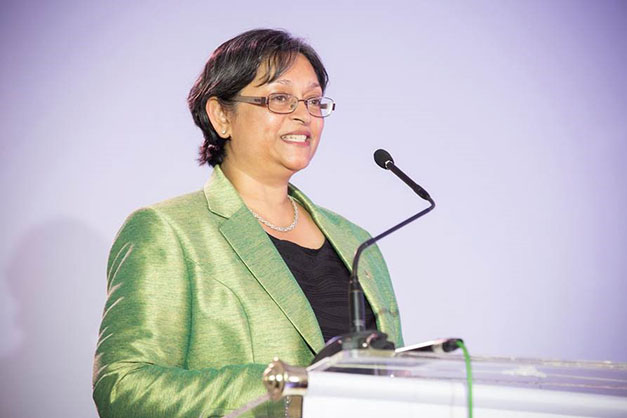 Professor Quarraisha Abdool Karim is the first Black academic in the history of the University of KwaZulu-Natal and the second Black woman academic in South Africa to receive the prestigious NRF A-rating for research.

Professor Quarraisha Abdool Karim, Associate Scientific Director at the Centre for the AIDS Programme of Research in South Africa (CAPRISA), has been awarded an A-rating from the National Research Foundation (NRF) for her seminal scientific contributions in HIV prevention research.
Acting Chief Executive Officer of the NRF, Dr Beverley Damonse, explained that A-rated scientists are "researchers who are unequivocally recognised by their peers as leading international scholars in their field for the high quality and impact of their recent research outputs. Professor Abdool Karim research is outstanding and she is among the finest scientists in our country".

Abdool Karim, a Professor of Clinical Epidemiology at Columbia University in New York and Honorary Professor in Public Health at the Nelson R Mandela School of Medicine of the University of KwaZulu-Natal, commented that she is "humbled by this recognition".  "I have been fortunate to be part of a great team of scientists in CAPRISA. I hope this achievement will inspire many more women to pursue careers in science."

She is a world-renowned for her scientific discoveries in HIV prevention. She has devoted the last 25 years to AIDS research; providing new insights into how the HIV epidemic spreads and impacts young women in Africa. She led the research team that first showed that antiretroviral drugs can prevent the sexual transmission of HIV, when her CAPRISA 004 study showed that tenofovir gel reduced HIV risk in women. This discovery was ranked as one of the Top 10 Scientific Breakthroughs of 2010 by Science. Her article in this week’s New England Journal of Medicine, the world’s most prestigious medical journal, describes her team’s discovery that the antiretrovirals can protect women from genital herpes.

Abdool Karim, a world leader in AIDS research, plays an active role in guiding the global response to the HIV epidemic. She serves as an Advisor on HIV infection to several United Nations agencies, including the World Health Organisation (WHO), UNICEF and UNAIDS. She is a member of the UNAIDS Scientific Expert Panel and the WHO’s HIV Clinical Guidelines Committee that sets the international standards for treating HIV infection.  She is also Scientific Advisor to the Executive Director of UNAIDS and serves on the Scientific Advisory Board of the US President’s Emergency Plan for AIDS Relief (PEPFAR).

Abdool Karim has published about 200 articles in medical journals, written several books and book chapters and mentored several young South African scientists. In 2014, Abdool Karim was awarded the South African Medical Research Council’s Gold Medal as well as the Science-for-Society Gold Medal for ‘outstanding achievement in scientific thinking to the benefit of society’ by the Academy of Science in South Africa.  In 2013, she was awarded the African Union’s Kwame Nkrumah Prize for Science and Technology and the TWAS-Lenovo Prize by The World Academy of Sciences (TWAS) "for her exceptional and distinguished contributions to HIV prevention and women's health".

In 2013, Abdool Karim received South Africa’s highest honour, the Order of Mapungubwe, from the President of South Africa for "outstanding work in the field of HIV/AIDS and Tuberculosis Research and Health Policy Development". She is a recipient of the "Distinguished Women in Science" Award from the Department of Science and Technology.

She has been bestowed with numerous prizes and awards for her research and has been elected to several of the world’s most prestigious science academies. In October this year, she is being inducted into the US National Academy of Medicine, considered one of the highest honours in the field of health and medicine. She is a Fellow and Vice-President of the African Academy of Sciences, Fellow of the Royal Society of South Africa and a Fellow of the Academy of Science of South Africa.