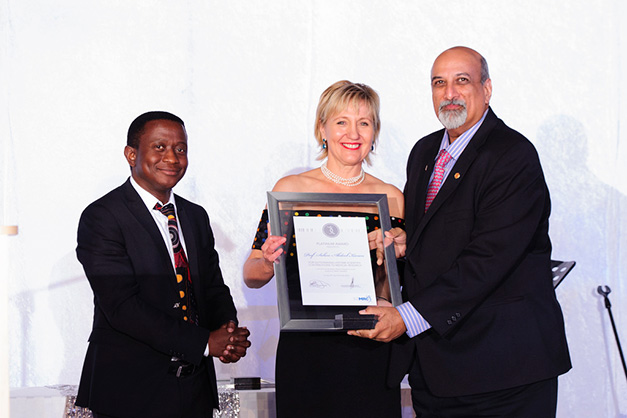 While South Africa has made impressive progress in its HIV response, the spread of HIV has yet to be controlled says leading AIDS scientist Professor Salim S. Abdool Karim. "Impressive progress in scientific discovery, resource mobilisation, political commitment and implementation has been achieved, but young women in Africa still have high HIV rates," said Abdool Karim. "Each day there are about 1 000 new infections in South Africa."  Abdool Karim was responding to the announcement that he has been named as a recipient of the South African Medical Research Council’s (SAMRC) Platinum Lifetime Achievement Award for "excellence in research" this year.

An accomplished scientist who has dedicated over 30 years to social justice, human rights activism and scientific research, Abdool Karim has made several important breakthroughs ranging from treatment for HIV-TB co-infected people to new approaches to prevent HIV infections. Commenting on his current research, which focuses mainly on innovative technologies to prevent HIV, he said, "we won’t stop HIV in young women tomorrow…. but it has to be part of our long-term vision".

According to the SAMRC, the Platinum Medal is a Lifetime Achievement Award for an outstanding scientist who has contributed substantially to improving health through research and helped build the foundations of health research in the country for future generations. Professor Mike Sathekge, Chairperson of the SAMRC Board, paid tribute to Abdool Karim, saying that the Medical Research Council "recognises and congratulates you as an outstanding South African scientist who has contributed enormously to raising the profile of science in South Africa."

In response to the HIV epidemic in KwaZulu-Natal, Abdool Karim established the award-winning research institute, CAPRISA - Centre of the AIDS Programme of Research in South Africa. He is Pro Vice-Chancellor for research at the University of KwaZulu-Natal and Professor in Clinical Epidemiology at the Mailman School of Public Health at Columbia University.  He chairs the Scientific Expert Panel of the Joint United Nations Programme on AIDS, UNAIDS and is a member of both the World Health Organisation’s HIV-TB Task Force and the WHO Expert Panel on Sexually Transmitted Infections and HIV.

The award will be presented at the SAMRC Scientific Merit Awards Evening in Cape Town on 29th October.