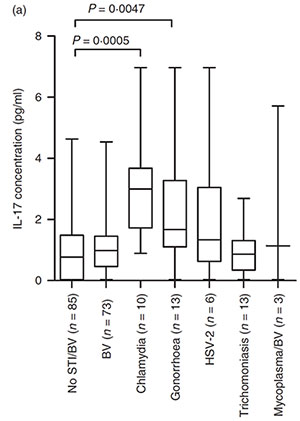 Research conducted by the mucosal immunology team at CAPRISA was recently published in the journal Immunology.  Their findings suggest that interleukin-17 (IL-17)production in the female genital tract may be induced in response to bacterial but not viral sexually transmitted infections (STIs).

Although T helper type 17 (Th17) cells have been shown to play an important part in regulating immunity against fungal and bacterial pathogens at other mucosal surfaces, including the gut and the lung, their role in the female genital tract is not well understood. This study aimed to improve our understanding of the role of Th17 cells in the female genital tract in immunity to common pathogens.

Women were screened for common female genital tract infections and bacterial vaginosis (BV). Women with bacterial STIs, specifically Chlamydia trachomatis and Neisseria gonorrhoeae, had higher genital IL-17 concentrations than women with no STI or BV (Figure 1). In contrast, women with candidal pseudohyphae/spores had lower IL-17 concentrations compared with women without candidal infections, suggesting that candida may actively suppress IL-17 production or women with dampened IL-17 responses may be more susceptible to candidal outgrowth.

Viral STIs (HSV-2 and HIV), BV and Trichomonas vaginalis were not associated with significant changes in genital IL-17 concentrations. Genital IL-17 concentrations correlated strongly with other inflammatory cytokines and growth factors. Although Th17 cells were depleted from blood during HIV infection, cervical Th17 cell frequencies were similar in HIV-uninfected and HIV-infected women. Cervical Th17 cell frequencies were also not associated with STIs or candida, although few women had a STI.