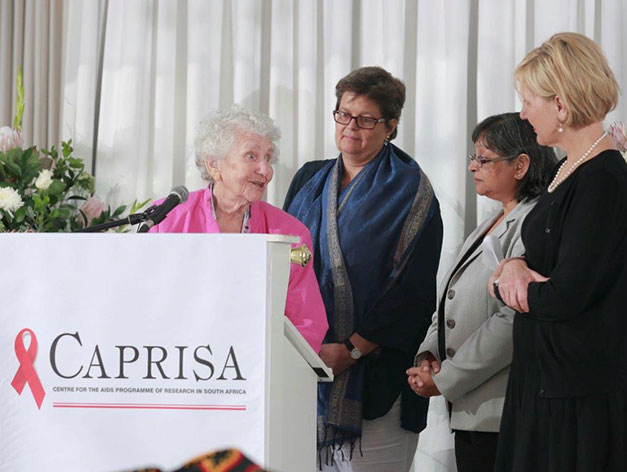 The South African Medical Research Council has established The Lectureship Fund for Eminent Visiting Scientists in an effort to strengthen South African medical research as well as to support and build global linkages between local researchers and top international scientists.

To begin with, the fund will host two annual sets of lectures in the areas of Paediatrics and Public Health respectively. The Hoosen Coovadia Lectureship series will be hosted by the South African Paediatrics Association, which will use the funds to invite an eminent international paediatrician to deliver a series of scientific lectures on child health at South African academic institutions and universities. The second lectureship, named the Mervyn Susser and Zena Stein Lectureship series, will be hosted by the Public Health Association of South Africa (PHASA) and will focus on epidemiology and public health.

“Professors Hoosen (Jerry) Coovadia, Mervyn Susser and Zena Stein are world-renowned South African scientists who are being acknowledged with these lectureships for their significant contributions to medical research in diseases affecting the poor and vulnerable in Africa,” says President of the MRC, Professor Glenda Gray. Professor Hoosen Coovadia was Head of Paediatrics at the Nelson R Mandela School of Medicine at the University of KwaZulu-Natal and has undertaken ground-breaking research on measles, malnutrition, kidney disease and HIV transmission from mother to child. He recently received the MRC President’s Award and the National Research Foundation’s Lifetime Achievement Award. Husband-and-wife team, Professors Mervyn Susser (deceased 14th August 2014) and Zena Stein, had undertaken pioneering research on health conditions in South African townships in the 1950s before they fled apartheid and have since undertaken innovative research on malnutrition and brain function through their study of the Dutch famine during World War II.

The MRC established The Lectureship Fund for Eminent Visiting Scientists following a donation of R1million from Professors Quarraisha and Salim Abdool Karim. The donation emanates equally from the money Professor Quarraisha Abdool Karim received for the TWAS-Lenovo Award from The World Academy of Sciences and the prize-money Professor Salim S. Abdool Karim received for his Kwame Nkrumah Award from the African Union. The Medical Research Council contributed a matching R1million to establish this fund as part of its mandate to develop and support medical research excellence in South Africa.

Associate Scientific Director of the Centre for the AIDS Programme of Research in South Africa (CAPRISA), Professor Quarraisha Abdool Karim, commented that, “Professors Coovadia, Susser and Stein have contributed a rare legacy as brilliant scientists and champions of addressing health disparities through science and advocacy. Naming the Eminent Lectureships in their honour engenders a culture of exceptional science intermingled with a commitment to human rights and the disenfranchised on the African continent.”