CAPRISA celebrates trio of triumphs at Advisory Board meeting 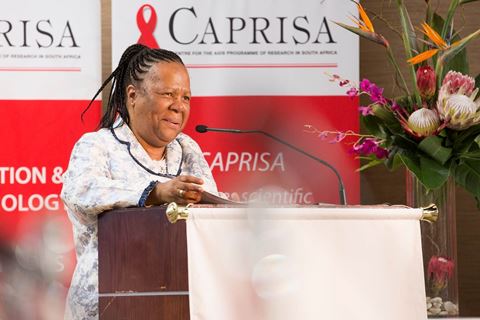 CAPRISA has been designated a DST-NRF Centre of Excellence in HIV prevention. The announcement was made at the CAPRISA Scientific Advisory Board meeting that took place in Durban on 14-15 April 2015.

The recognition, announced by Science and Technology Minister Naledi Pandor on the meeting's first day, means that CAPRISA will be receiving an annual lump sum of money from the NRF for at least five years, possibly ten, towards training and research.

"I'd like to congratulate the vice-chancellor of the University of KwaZulu-Natal and Prof Salim Abdool Karim, who will head and give leadership to the centre," Pandor told the meeting at the Fairmont Zimbali Resort.

"We're very excited that such a centre of excellence is being established for the first time in South Africa," she added.

The announcement was the first of a trio of CAPRISA triumphs unveiled at the meeting. At a press conference, CAPRISA's Prof Quarraisha Abdool Karim announced jointly with Prof Glenda Gray, President of the South African Medical Research Council, a new distinguished lectureship programme in honour of three  eminent researchers who are respected  as pioneers in their fields and have made outstanding contributions to HIV research in South Africa.

The lectureships are sponsored using money from prizes that Professor Salim and Quarraisha Abdool Karim received last year for their achievements in research, with matching funding from the SAMRC. The lectureship programme will enable senior scientists/researchers in the fields of paediatrics and public health to deliver academic and scientific lectures in South Africa. The lectures will be coordinated through the Public Health Association of South Africa (PHASA) and the South African Paediatric Association (SAPA).

The public health lectureship has been named after Zena Stein and her late husband Mervyn Susser, who mentored many of South Africa's leading researchers in the field. The pediatric lectureship, meanwhile, is named after Hoosen ‘Jerry' Coovadia, who pioneered Prevention of Mother to Child HIV transmission in South Africa.

Finally, the meeting also welcomed Professor Francoise Barré-Sinoussi from the Institut Pasteur in France onto the CAPRISA Science Advisory Board. Professor Barré-Sinoussi received the 2008 Nobel Prize in physiology for her role as a co-discoverer of HIV, the virus that causes AIDS.

"It's a real honour and pleasure for me to be part of the CAPRISA Scientific Advisory Board," Barré-Sinoussi told journalists in the press conference.

The CAPRISA Science Advisory Board meets yearly to advise and give guidance to CAPRISA's scientists. The 2015 meeting was attended by  US Ambassador Deborah Birx, Global US AIDS coordinator and Ambassador at Large,  Dr Luis Loures, Assistant Secretary - General of the United Nations, Deputy Executive Director of UNAIDS, and a number of other international and South African scientists and policymakers.