Scientist honoured as a Living Legend 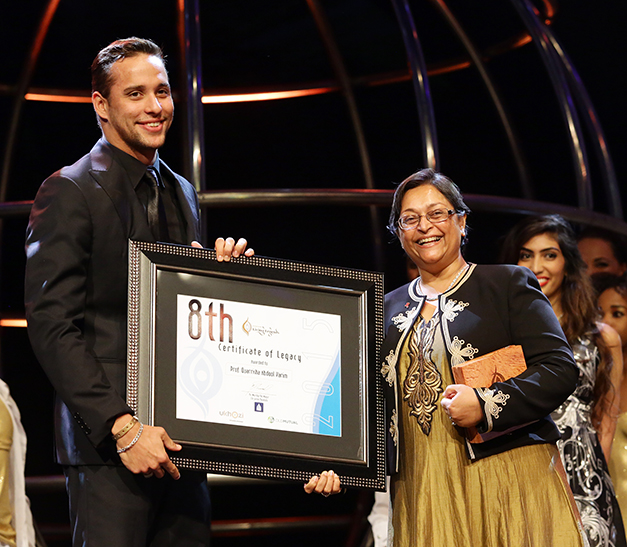 CAPRISA’s Associate Scientific Director Professor Quarraisha Abdool Karim has been honoured as a citizen of the eThekwini Municipality for her significant contributions in HIV prevention research to the communities of eThekwini and indeed South Africa. The announcement was made at a prestigious ceremony on Saturday, 29 August 2015 at the Inkosi Albert Luthuli International Convention Centre in Durban.

The eThekwini Living Legends Awards “honours eThekwini citizens who have diligently dedicated their time and skills to uplift communities and contributed immensely to developing the society at large. It aims to salute the inspirational and continuous contribution that these individuals have brought to local communities and South Africa as a whole,” said  eThekwini Municipality’s Communications Head, Ms Tozi Mthethwa.

Mayor, Cllr James Nxumalo said that the Awards present the Municipality with an opportunity to honour its legends and reflect on their distinct achievements and contribution to the community of eThekwini and the country at large.

“We are proud of their achievements and progressive contribution which serves as an inspiration to the younger generation to emulate these men and women who have selflessly served our communities. They are products of our local neighbourhoods and communities, emerging from different walks of life,” said Nxumalo.

Professor Abdool Karim said she was “deeply humbled to be one of the recipients of this prestigious award. Young women have the highest rates of HIV infection in Africa and as researchers we have a chance to alter the course of this epidemic and save millions of lives. It is a commitment that I hope will provide women with an array of safe and efficacious HIV prevention technologies.”