Getting to Zero: World AIDS Day

The state of the global HIV response:
What are the prospects of “getting to zero”? 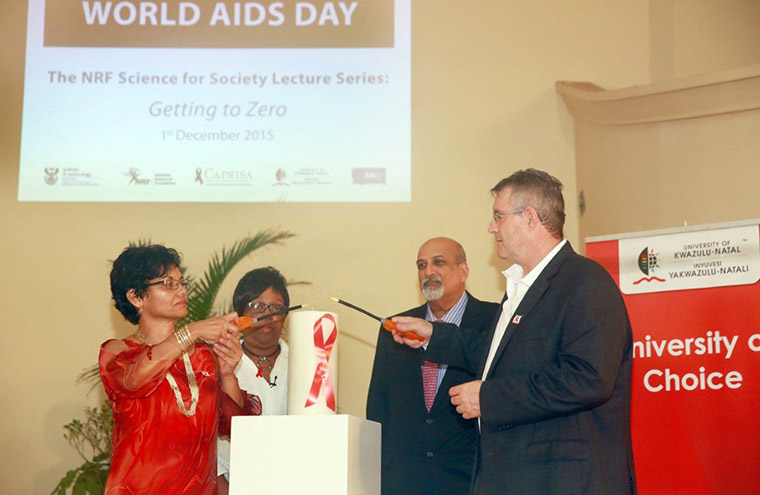 While education and condoms dominated the early response to the HIV epidemic, antiretroviral drugs have taken centre stage in the modern approach to HIV prevention.  Nowhere is this clearer than in the World Health Organisation HIV guidelines that were released today with 2 key messages:
1)    Treat everyone who is HIV positive – the new guidelines recommend universal HIV testing and treatment of everyone regardless of CD4 count.
2)    Offer antiretroviral drugs as prophylaxis to all who are at high risk of acquiring HIV.

Indeed, antiretroviral drugs have transformed the face of the HIV epidemic and have become the cornerstone of the global HIV response. ART has dramatically improved death rates and quality of life. They have revitalized communities ravaged by HIV and has transformed perceptions of AIDS from being a “death sentence” to being a manageable, chronic illness. However, ART cannot cure HIV, which remains a lifelong medical condition. Indeed, current research to find a cure is at a very preliminary stage with no prospect of a cure for AIDS anytime soon.

The first antiretroviral drug, azidothymidine (AZT), for treating AIDS was available in 1987 and in 1996, combination ART with three drugs was shown to be more effective than single drug treatment. However, these life-saving treatments were unaffordable and inaccessible to most people needing it at the time.

In 2000, community organisations, trade unions, activist groups, scientists and health care workers united at the 13th International AIDS Conference, held right here in Durban, to demand the end to the injustice of global inequity in access to AIDS treatment.

The incredible achievement of scaling up ART, particularly in developing countries, was made possible through drastic reductions in drug prices, pioneered by Indian pharmaceutical company, CIPLA, coupled with the availability of substantial new resources for AIDS treatment from the Global Fund to fight AIDS, TB and Malaria (GFATM), which was created in 2002, and the President’s Emergency Plan for AIDS Relief (PEPFAR), which was created in 2003.

While significant advances in scaling-up ART have been achieved globally - just over 15 million of the 37 million people living with HIV are now on ART – there is still about 22 million more people who need ART. A major obstacle to treatment of these people living with HIV is that most do not know they have HIV infection.

Knowledge of HIV status is an essential first step in accessing treatment and prevention services. Although HIV counselling and testing has been scaled-up substantially, stigma, denial and a lack of understanding of risk have contributed to lower-than-expected HIV testing rates. To overcome these challenges, several strategies, such as provider-initiated testing and home-based testing have been developed to improve HIV testing uptake.

Once identified as HIV positive, linkage to care, ART initiation and retention in care are additional challenges that are part of the treatment cascade which aims to have all people on treatment have an “undetectable viral load” ie. Levels of virus in the blood that are so low that they cannot be detected with our standard tests. Achieving and maintaining undetectable viral load is the key objective for preventing transmission as well as minimising the development of drug resistance.

Treatment provision is a key component of any country’s AIDS strategy, with UNAIDS setting 90-90-90 as the target for each country – 90% of people living with HIV should know their HIV status, 90% of people living with HIV should be on antiretroviral therapy and 90% of these individuals on treatment should have an undetectable viral load. But, not only is ART life-saving, but it also has the potential to prevent HIV transmission. In discordant couples, the treatment of the HIV positive partner has been shown to reduce HIV transmission to HIV negative partners by 96%. When large numbers of HIV positive people within a community go onto ART, there is accumulating evidence that there is a population level impact on reducing the spread of HIV.

Preventing new infections is just as important as providing treatment for people already living with HIV.  UNAIDS estimates that approximately 5,600 people become infected with HIV daily, 3,700 in Africa and about 1,000 in South Africa.

“Safer sex” by reducing the number of concurrent sexual partnerships and the use of condoms are key components of HIV prevention messages, widely endorsed as part of “ABC” campaigns promoting Abstinence, Be faithful and Condom use. Condoms are a pivotal part of the fight against HIV/AIDS. They are inexpensive and relatively easy to use and provide protection against acquisition and transmission of HIV, a wide range of other sexually transmitted infections as well as pregnancy.  When used correctly and consistently, the male and female condoms are highly effective in preventing the sexual transmission of HIV. However, despite their wide availability, condom uptake has been sub-optimal – as there are many barriers to condom use.

Knowledge of HIV status is another vital component of HIV prevention programmes and is the common gateway to both treatment and prevention. HIV counselling and testing (HCT) has been shown to be both efficacious in reducing risky sexual behaviours and cost-effective as a prevention intervention. However, denial and a lack of appreciation of vulnerability and risk has fostered low HIV testing rates. Discrimination and social marginalization continue to be experienced daily by people who are the most affected by HIV, further contributing to their reluctance to test for HIV.

There are also a number of new HIV prevention technologies, beyond the ABCs, that have become available in recent years. In 2005, male circumcision was proven to reduce HIV acquisition in men by about 60%. Since 2008, about 9 million adult men from 14 high HIV burden countries have had circumcisions for HIV prevention.

There is also compelling evidence that the use of antiretroviral drugs, like Tenofovir, as pre-exposure prophylaxis (PrEP) by HIV negative people can significantly slow the spread of HIV. If taken correctly and consistently, PrEP can markedly reduce the spread of HIV. Many countries, including South Africa, are moving towards the incorporation of PrEP into their national HIV programmes. The US and France have already approved the use of tenofovir-based PrEP. Roll-out of PrEP for female sex workers and men who have sex with men is beginning to gather pace, but for adolescents and young men and women in high-prevalence settings, it is still early days.

Oral PrEP could be a particularly important intervention in adolescent girls, who are often unable to negotiate mutual faithfulness and/or condom use with their male partners, as it uniquely offers them an opportunity to directly control their risk of acquiring HIV infection.  Initiatives like PEPFAR’s DREAMS project, which aims to empower young people to make their own decisions and establish an AIDS-free generation, includes a PrEP component for young women and adolescent girls.

One of the greatest challenges with the use of PrEP for HIV prevention is that some individuals do not take their tablets everyday as prescribed.  Research is therefore ongoing to find even better technologies to prevention HIV.  On the horizon as options for women are a number of long-acting antiretroviral-based HIV prevention options. The most noteworthy candidates are long-acting antiretroviral intravaginal rings and long-acting injectable antiretorivral drugs. If shown to be effective, these products may potentially improve adherence as they are less dependent on user compliance.

Results of trials on the monthly dapivirine intravaginal ring are anticipated in early 2016. Studies on long-acting antiretroviral injectable agents such as rilpivirine and cabotegravir, which can be administered every 2 months, are ongoing. Another potential new HIV prevention strategy on the horizon is the use of broadly neutralising antibodies as passive immunization to prevent HIV infection. Although the realisation of this strategy is still several years away, the isolation of a number of new broad and potent monoclonal antibodies over the past 5 years and promising new data showing the effectiveness of such a strategy in monkeys, has created a newfound enthusiasm for its potential as a non-antiretroviral based HIV prevention strategy. Ultimately, this approach could lead to a safe and effective vaccine against HIV.

Slowing the HIV epidemic in South Africa remains a major challenge. There is no room for complacency! There is much more that needs to be done. Combinations of several different HIV prevention options will be needed for “getting to zero”. We can do it by scaling up safe sex education, condom promotion, HIV counselling and testing, voluntary medical male circumcision for men, gender-based violence reduction and the use of antiretroviral drugs for both treatment and prevention.  Ultimately, we will also need new tools, especially for South Africa’s highest priority group for HIV prevention – young women and adolescent girls. The future holds great promise as science generates new effective HIV prevention strategies. Ultimately, the responsibility will fall on each us to realise the goal of “getting to zero”.