Commemorating World AIDS Day "There is no room for complacency" 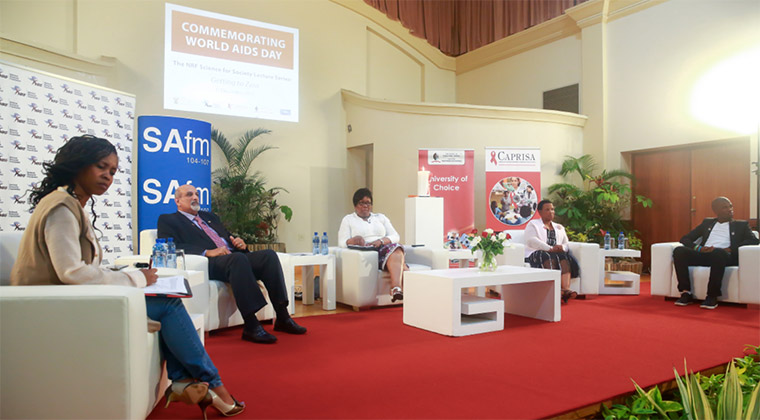 Answering questions from the audience during the panel discussion at the NRF Science for Society lecture on “Getting to Zero” were (L-R): Naledi Moleo from SAfm; Professor Salim Abdool Karim from CAPRISA; Professor Koleka Mlisana from  UKZN, Ms Gethwana Mahlase from Comosat and Mr Bonginkosi Mafuze, UKZN medical student

World AIDS Day – Getting to Zero. CAPRISA and UKZN co-hosted the NRF Science for Society lecture titled Getting to Zero to commemorate World AIDS Day on Tuesday 1 December. The lecture held at the UKZN Howard College campus was broadcast live on SAfm for two hours with lively audience engagement.

The presenters, Professor Koleka Mlisana Head of Medical Microbiology at UKZN and Professor Salim Abdool Karim Director CAPRISA covered the origins and the current state of the virus and the state of the global HIV response and the prospects of "getting to zero". Panellists Ms Gethwana Mahlase and Mr Bonginkosi Mafuze a fifth year medical student spoke about the importance of active partnerships between communities and researchers.

Prof Mlisana highlighted the disproportionate high rates of infection of young women in sub-Saharan Africa with rates as much as "8-fold higher than their male counterparts".

Slowing the HIV epidemic in South Africa remains a major challenge explained Prof Abdool Karim. He said there was no room for complacency and much more needed to be done. Combinations of several different HIV prevention options will be needed for "getting to zero". "We can do it by scaling up safe sex education, condom promotion, HIV counselling and testing, voluntary medical male circumcision for men, gender-based violence reduction and the use of antiretroviral drugs for both treatment and prevention. Ultimately, we will also need new tools, especially for South Africa’s highest priority group for HIV prevention – young women and adolescent girls.

He said that the future holds great promise "as science generates new effective HIV prevention strategies. Ultimately, the responsibility will fall on each us to realise the goal of "getting to zero".

Read the article on CNN below: